Watch the video, listen to the podcast episode or scroll down to continue reading.

There’s a specific way that you progress through the museum. When you first walk in, there’s an eight-minute film that transitions visitors into the museum. Following the film, there are dioramas that show what the environments would have been like for Black versus White people. 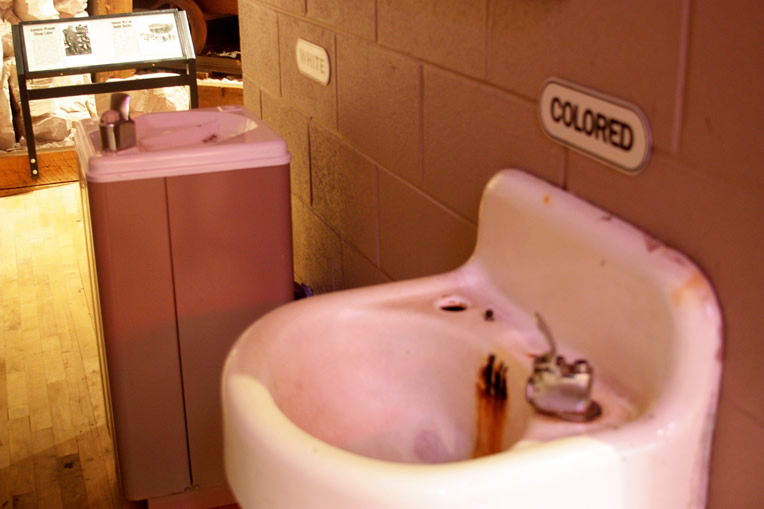 A diorama represents what classrooms looked like at the time. The classroom of the segregated White school is nice and clean looking. The chairs, desks, and textbooks are new and in good condition. The colored classroom doesn’t necessarily look dirty but everything looks old. The textbooks look worn out and the desks look like they’ve been around forever. It’s a really great visual representation of the fallacy of the separate but equal ideology. People were separate but things certainly weren’t equal.

There are also scenes from everyday Black life. Photos from local music venues and theaters, social places where Black people would frequent to relax and unwind.

Black people made up the majority of the workforce but their employment options were limited within mainstream society. They were relegated to positions that wouldn’t really allow them an opportunity to move up economically or achieve financial security. A lot of people in the area worked for mines and mills in the community. Due to Jim Crow and racism, Black people were usually relegated to the most dangerous and physically demanding jobs. And then to top that off, they were also paid pretty lowly. This contributed to Birmingham’s Black community creating its own business district in the Downtown area.

The museum houses a great collection of old photos. I liked the aerial photos that really give you an idea of what the city looked like in the past. Placards explain how Black people were limited to certain parts of the city. They were pushed to the outskirts of town, where they didn’t have access to city resources. Being relatively distant from the city, Black people were made to live in or alongside places, where most people wouldn’t want to live (ex: near railroad tracks).

The museum provided text to explain these things but being able to look at old photographs of houses and the city’s layout really helped to drive home the point. The houses looked crammed together and were small and ramshackle. Some looked on the verge of falling apart.

Neighborhoods usually sprang up near places where people worked. White-only neighborhoods developed due to racism so Black people didn’t live in these neighborhoods for social reasons. But, there was also legal segregation where zoning ordinances legally restricted the areas where black people could live.

Inequality was also present in facets of society beyond employment opportunities (ex: medical care). And even in instances where Black people were allowed to work in certain fields, such as the school system, there was inequality in salaries. I’d read about this in The Warmth of Other Suns, where Black and White people would be working in the same city and in the same school system. The school system received its funding from taxes in the state. But, institutional inequality allowed for a Black teacher at a Black school to make far less than a White teacher at a White school.

The way that the museum represents these inequality stats is very creative. For example, because of the limitations that were placed on Black society, there was a difference in the amount of blue and white collar workers. This was represented by blue uniform style shirts versus white suit shirts.

A justice system display covers legal cases that helped to uphold segregation and the denial of voting rights. A judge’s bench houses a flip book with short blurbs about important court cases that either upheld segregation or contributed to overturning Jim Crow laws. The blurbs were straight to the point and easy to read which made it possible to digest what is a lot of information.

There’s a collection of racist ads and promos featuring stereotypical caricatures of Black people. Not only do visitors learn about the injustices that Black people faced in society but also about the stereotypes and negativity that were portrayed about them in media. It shows how representation in movies and popular culture helped to influence the perception of Black people by reinforcing the racism and stereotypes that were already present in society. A cycle existed where these beliefs that were held in general society were then reflected in media and the media reinforced these views which served as confirmation of the beliefs of society. So there is a constantly repeating cycle of negativity and racism.

After making your way through the dioramas, there is still a lot of content.

An interesting feature is the timeline of the events that led up to and then during the campaigns of Freedom Summer and the Bus Boycott. Throughout this portion of the exhibit, there is information about and photos from the sit-ins, voter registration drives, and other facets of the Civil Rights Movement. I thought the life-sized firebombed bus was compelling.

I really enjoyed the Civil Rights timeline. It’s huge and spans quite a few rooms in the museum. I didn’t get to read everything because time was winding down but there was a wealth of information. It’s laid out like “on this day, in this year, such and such an event occurred”. The timeline is very granular and is split into a Birmingham / Alabama side and USA side. So it’s like you have the timeline moving along the wall and on one side of the timeline, there are details about what’s going on around the country. And then on the other side of the timeline, you have specific events that took place locally within the state/city.

The museum and timeline end closer to the present. The major timeline ends around the 70s and information beyond that moves into another room. A short timeline about the 90s includes information about the investigation and convictions related to the bombing of the 16th Street Baptist Church. 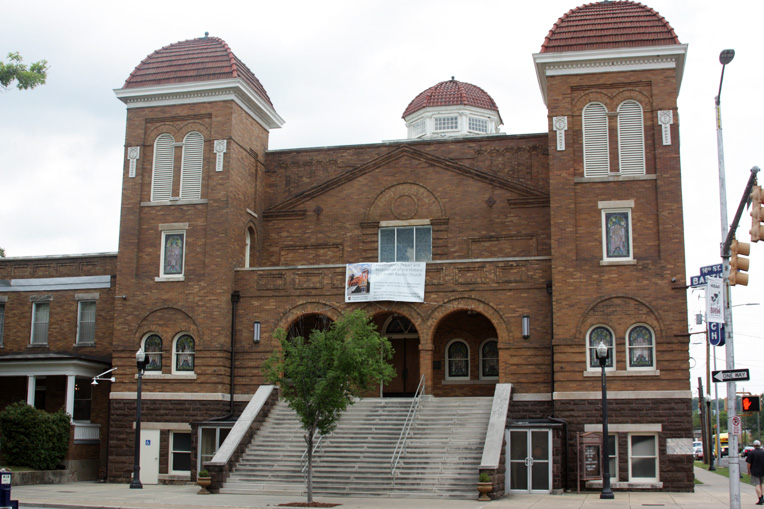 The museum experience ends with a lively and interesting video about the Birmingham Children’s Crusade. During the Civil Rights Movement, a lot of the activist adults had been arrested so there wasn’t a lot left to protest or arrest.

School children ranging in age ditched school over the course of a few days and set off on marches from the 16th Street Baptist Church. The kids were organized into groups of 100 and then sent off in spaced out waves to march. The goal was to bring attention to what was going on in Birmingham but with the kids being arrested, it garnered even more attention. People from around the country and also around the world saw these kids marching and having dogs sicced and fire hoses turned on them. With adults, I sympathize with their experience but there’s something even more troubling about these kinds of things happening to children.

These people who were children at the time are now very much so adults talking about their experiences growing up during that time. The excitement of essentially cutting school for what would be considered a good cause and dealing with their parents and teachers some of whom discouraged them from participating. It started out from a negative place because you’re dealing with inequality. But, I thought it was uplifting to see these kids taking a stand. Yet, it was upsetting to see dogs attacking children and grown people turning fire hoses on kids.

I left the museum feeling if not optimistic about the future then at least positive. Moving through all of this negativity and then seeing these kids stand up for themselves and seeing them smiling and describing their experiences as adults left me with a pretty balanced feeling. I wasn’t sad or depressed when I left but I certainly wasn’t happy either. The video helped to alleviate some of the heaviness from the earlier parts of the museum.

On the way out, you can see outside and into Kelly Ingram Park which is across the street and was a gathering place during the Civil Rights Movement. Across the other side of the street, you have the 16th Street Baptist Church at which four little girls were murdered during a bombing. It’s still a functioning church at present but if you contact them in advance it’s possible to arrange to visit and tour the inside of the church. 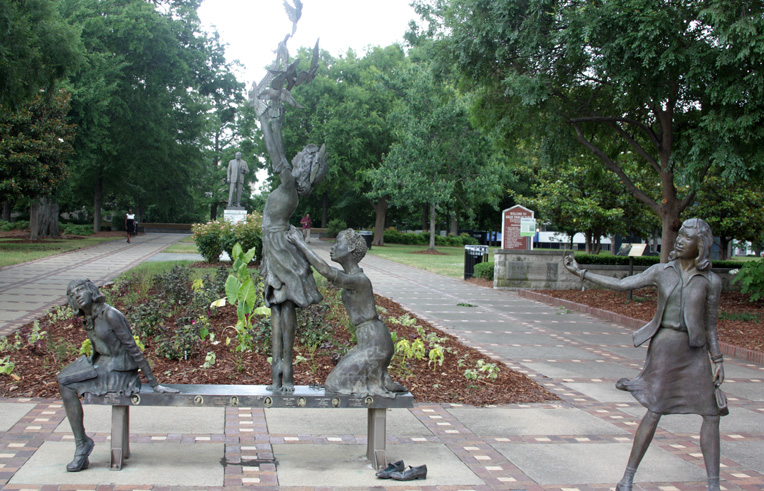 I would recommend that you allow yourself three to four hours to see the museum. Keep in mind that backpacks aren’t allowed. I didn’t know this before I arrived so I had to leave my bag at the security office. It wasn’t a much of an inconvenience but just to avoid a headache, you might want to only carry what you can actually carry in your hands.

Disclosure: Noire Histoir is a participant in the Amazon Services LLC Associates Program, an affiliate advertising program designed to provide a means for the website to earn fees by linking to Amazon.com and affiliated sites. Noire Histoir will receive commissions for purchases made via any Amazon Affiliate links above.

Natasha is a marketer by day and a voracious reader at all other times. She developed a passion for history and storytelling as a child and became increasingly interested in global Black nonfiction and literature as an adult.

This site uses Akismet to reduce spam. Learn how your comment data is processed.