“The New Jim Crow: Mass Incarceration in the Age of Colorblindness” by Michelle Alexander tackles the complex issues of mass incarceration. Other sources have discussed how the raw figures have grown over time. But as a civil rights attorney and legal scholar, Alexander provides an intriguing exploration of the history of the policies, reforms, and social attitudes that have contributed to the creation of the prison industrial complex.

END_OF_DOCUMENT_TOKEN_TO_BE_REPLACED

A Kind of Freedom [Book Review]

A Kind of Freedom [Book Review]

A review of “A Kind of Freedom” by Margaret Wilkerson Sexton, the story of three family members which provides a glimpse into issues such as Jim Crow, drug addiction, and mass incarceration that have plagued the Black community.

END_OF_DOCUMENT_TOKEN_TO_BE_REPLACED

The Sun Does Shine [Book Review]

The Sun Does Shine [Book Review]

“The Sun Does Shine” is an autobiography written by Anthony Ray Hinton about his life and experience as a wrongfully convicted man. At the age of 29, Hinton was arrested in connection with a string of robberies that left two people dead. A poor Black man living in Alabama, Hinton was unable to independently afford an attorney or mount a vigorous defense. Convicted and sentenced to death, Hinton would spend the next 28 years fighting for his freedom and his life.

END_OF_DOCUMENT_TOKEN_TO_BE_REPLACED

“Just Mercy” is a courtroom procedural drama adapted from the 2015 New York Times Bestseller of the same name. Written by Bryan Stevenson the original book was a memoir that told the story of his experience as an attorney focused on working to appeal death row convictions. Beginning in 1989, Stevenson (Michael B. Jordan) is a new Harvard grad but instead of launching his career at a cushy law firm he chooses a different path. Heading south to Alabama, Stevenson establishes the Equal Justice Initiative and hangs out a shingle as a lawyer open to working on death row cases pro bono.

END_OF_DOCUMENT_TOKEN_TO_BE_REPLACED 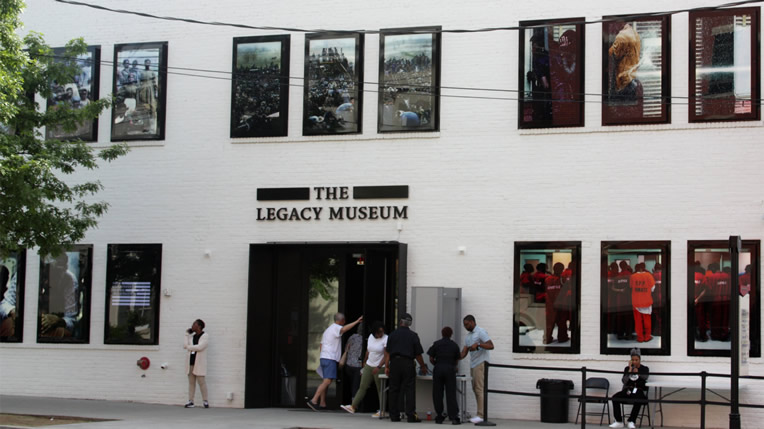 I visited The Legacy Museum, if not the first week, then the second week that it opened. The Legacy Museum was created by the Equal Justice Initiative and is located in Montgomery, Alabama. It’s a few blocks away from The National Memorial for Peace and Justice about a 15-minute or so walk and obviously a shorter distance driving.